Background: Satoshi Nakamoto’s development of Bitcoin in 2009 has often been hailed as a radical development in money and currency, being the first example of a digital asset which simultaneously has no backing or intrinsic value and no centralized issuer or controller. A purely peer-to-peer version of electronic cash would allow online payments to be sent directly from one party to another without going through a financial institution.

Bitcoin’s decentralized consensus process requires nodes in the network to continuously attempt to produce packages of transactions called “blocks”. Bitcoin’s blocks contain the transactions on the bitcoin network. The on-chain transaction processing capacity of the bitcoin network is limited by the average block creation time of 10 minutes and the block size limit of 1 megabyte. These jointly constrain the network’s throughout and hinder Satoshi’s original vision of making Bitcoin a means of payment in everyday life.

Bitcoin was meant to be a peer-to-peer cryptocurrency that was used for daily transactions.

Over the years, as it gained mainstream traction and its price surged, Bitcoin Blockchain has faced up with Scalability issues. Its blockchain could not handle the increased number of transactions. The confirmation time and fees for a transaction on bitcoin’s blockchain surged, weakening the argument for bitcoin as a competitor to expensive credit card processing systems. (Fees for transactions on bitcoin’s blockchain are specified by users. Miners typically push transactions with higher fees to the front of the queue in order to maximize profits.) This was mainly due to the 1MB block size limitation for bitcoin.

Another example comparing the highest fees of BTC, BCH, and ETH in the latest transactions with amounts between 20 and 200 USD, Bitcoin’s transaction fees are approximately 532 times that of BCH, and 2.5 times more than ETH. 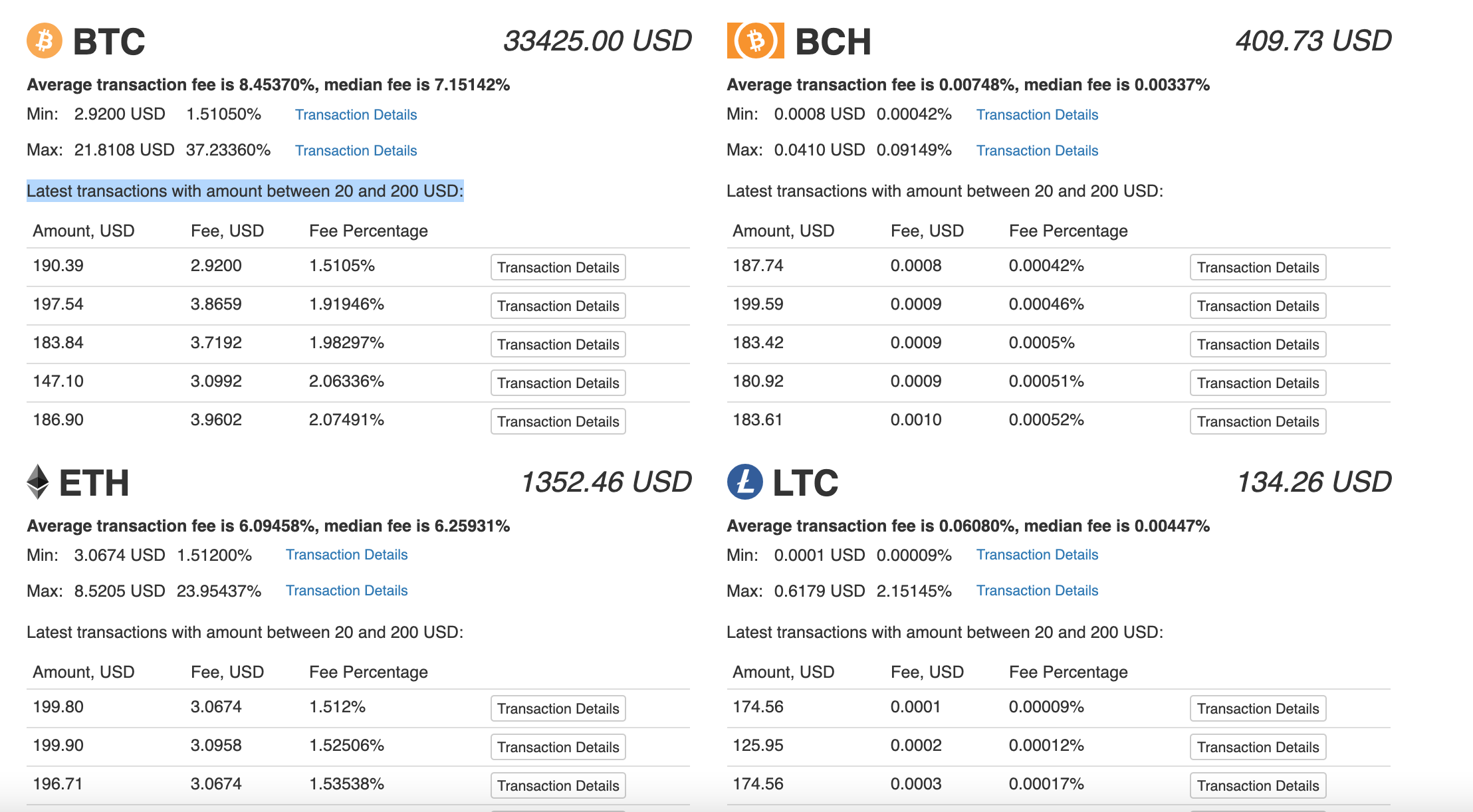 Transaction fees of latest transactions with amount between 20 and 200 USD. Source: cryptofees.net

The potential for adoption is there but is bottlenecked currently by scalability. There are various proposed and activated solutions to address this issue.

Explore a solution that helps to solve the bitcoin scalability problem

What were the arguments?

Proposal by The Bitcoin Core team

The Bitcoin Core team, which is responsible for developing and maintaining the algorithm that powers bitcoin made a proposal called SegWit2x. The SegWit2x plan will upgrade Bitcoin in two steps. First, a SegWit made with a soft fork will be implemented. Segwit aimed to improve the way Bitcoin worked by saying that signatures could be moved to a separate piece of paper, one that is filed along with the sheet containing the transaction information. The second phase is increasing the block size on the Bitcoin network from 1MB to 2MB, which is expected to start 3 months after SegWit’s success. In short, SegWit2x is Segwit plus 1 batch of Hark fork block size is up to 2MB, but the desire is not divisible by the Bitcon community.

However, the first proposal drew sharp and diverse reactions from the bitcoin community. Mining giant Bitmain was hesitant to support Segwit implementation in blocks because it would affect sales for its AsicBoost miner. Segwit makes it more expensive to mine Bitcoin using the machine because it makes transaction reordering difficult.

Proposal by another group of developers

Another group of developers led by ex-Facebook developer Amaury Séchet, however, disagreed with the above approach of separating the signatures from the transaction. They thought this was a “hack”. They didn’t believe it would actually go ahead and so came up with a different design.

Major proponents of Bitcoin Cash often invoke Nakamoto’s original vision of a payment service as a reason to increase block size. According to them, the change in bitcoin’s block size will enable bitcoin’s use as a medium for daily transactions and help it compete with multinational credit card processing organizations, such as Visa, which charge high fees to process transactions across borders.

The arguments have not just been about technology. There are ideological and commercial interests driving the various players.

In 2017 there were two factions of Bitcoin supporters: those that supported large blocks and those who preferred small blocks. The Bitcoin Cash faction favors the use of its currency as a medium of exchange for commerce, while the Bitcoin-supporting faction view Bitcoin’s primary use as that of a store of value. Bitcoin Cash detractors call the cryptocurrency “Bcash”, “Btrash”, or “a scam”, while its supporters maintain that “it is the pure form of Bitcoin”.

Finally, In August 1, 2017, some miners and developers initiated what is known as a hard fork, effectively creating a new currency: BCH. BCH has its own blockchain and specifications, including one very important distinction from bitcoin.

Bitcoin Cash promised several improvements over its predecessor. But it has yet to deliver on those promises.

The most important one is regarding block size. The average size of blocks mined on Bitcoin Cash’s blockchain is much smaller than those on Bitcoin’s blockchain. The smaller block size means that its main thesis of enabling more transactions through larger blocks is yet to be tested technically. Transaction fees for bitcoin have also dropped significantly, making it a viable competitor to bitcoin cash for daily use.

While its split from Bitcoin was fairly high-profile, Bitcoin Cash is mostly unknown outside the crypto community and is yet to make major announcements about adoption. Based on transaction levels on blockchain, Bitcoin still has a sizable lead on its competition.

The second fork on Bitcoin Cash’s blockchain also highlights problems with managing its developer pool. That a sizable section of the pool thought that Bitcoin cash was diluting its original vision is troubling because it opens the door to further splits in the future. Bitcoin Cash also does not have a clearly-defined governance protocol.

Why do we come up with the idea of bitcoin 8m?

Currently, Bitcoin is still held back to the 1 MB block size because of the reason to keep the network decentralized/stable and urge layer 2 (lightning) to grow.

However, layer 2 progress was not as expected, while Bitcoin Cash with a block size of 8MB did not cause any problems with the stability of the network.

The 1MB block size limit causes the transaction traffic on Bitcoin to be obstructed, and makes it impossible for Bitcoin to come to life with countries like Venezuela.

Meaning: Bitcoin will be traded more, even in difficult countries like Venezuela.

Download bitcoin8m here to experience the solution to increase the bitcoin block size without creating a hard fork.

Benefits of a Bigger Block Size

Firstly, small block sizes could lead to a Bitcoin future held and controlled by bank-like institutions

Smaller bitcoin blocks would mean that there isn’t enough space to include everyone’s transactions in these blocks, and the transaction fee to get transactions confirmed will be a “bidding war”.

Instead, it could lead to a future where only bank-like institutions make transactions with one another, while regular users hold accounts with these institutions. This would, in turn, open the door to fractional reserve banking, transaction censorship and more of the problems with traditional finance. If this happens, then the existence of Bitcoin no longer means anything, Bitcoin will then be no different than fiat.

Secondly, most people would be out of using bitcoin at all.

Users would simply give up on Bitcoin altogether because blocks are too small. Perhaps users would switch to a competing cryptocurrency or they would give up on this type of technology altogether.

So, Here are more reasons increasing the block size is vital: 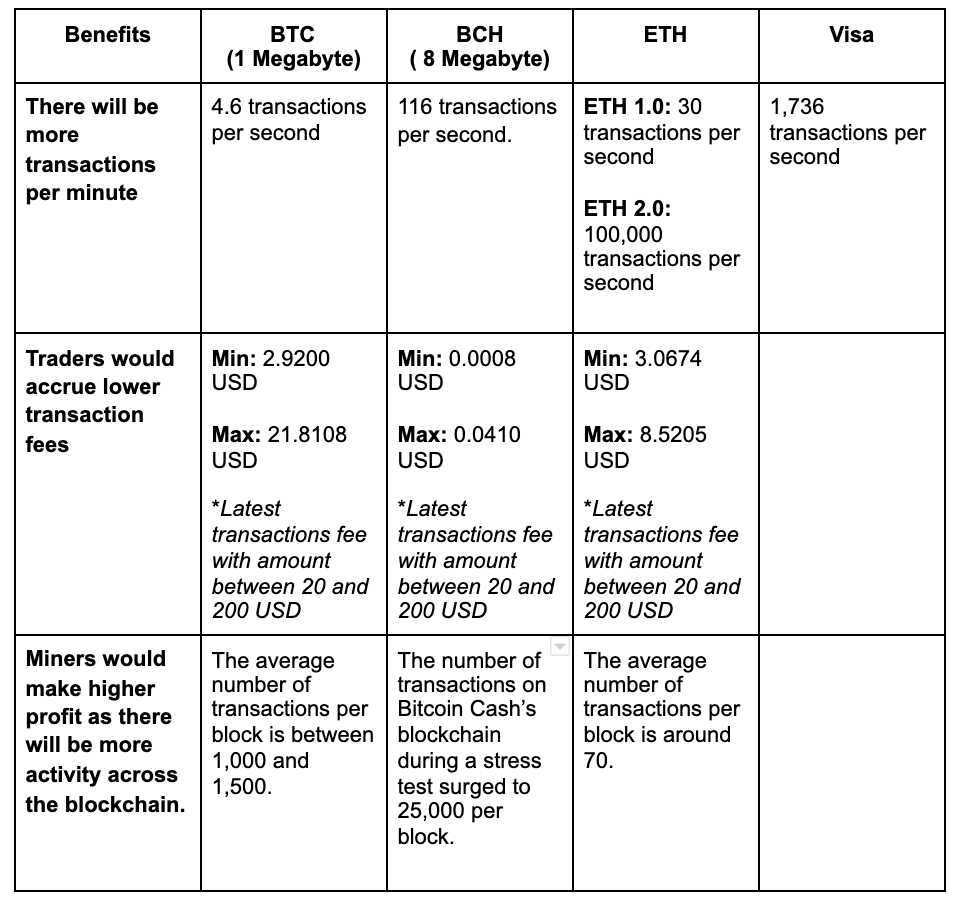 If Bitcoin achieves these advantages, Bitcoin will gain a competitive edge over other payment systems, ultimately making Bitcoin more universally adopted and accessible.

Basically, Bitcoin8m is a software update that improves the Bitcoin core block size 1MB to 8MB, so the way transactions work, and the mining method is exactly the same as the bitcoin core version. However, this minor release includes various bug fixes and performance improvements, as well as updated translations.

An important difference is the signature in the blocks. When a miner mines a block of Bitcoin, they sign on it. If so, miners can support Bitcoin 8M by downloading the signature provided by Remitano and signing on the block they have mined successfully with that signature. 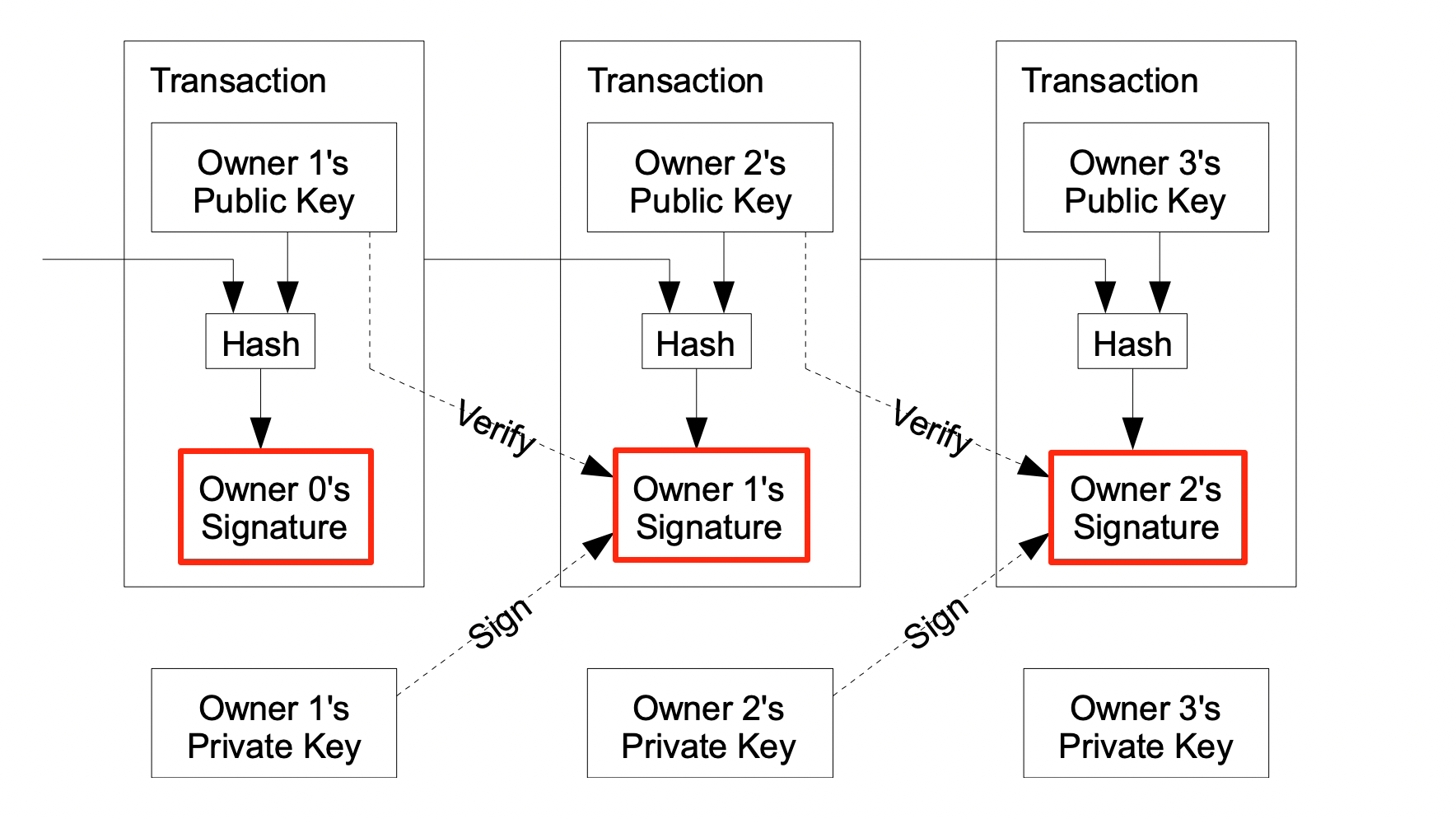 Learn more about How to Upgrade

You should be aware that Bitcoin-8m does not cause a hard fork. Bitcoin8m core is simply a modified version of bitcoin core to start accepting block of weight up to 8 times the regular MAX_BLOCK_WEIGHT (which is defined at 4000000) if 1000 consecutive blocks in the past show acceptance of big blocks. For every release of bitcoin core, we release a similar version with a different versioning convention that contains just the above tweak. For example, if version 0.21.0 is released for bitcoin core, we will release bitcoin8m core 8.21.0 which is identical except for the above tweak.

Remitano is a product of Babylons Solutions Limited based in Seychelles. Remitano’s purpose is to offer a robust, quality trading experience to all users as a fast-moving marketplace. With necessary safety standards in place, buyers and sellers can come together, store, trade, and withdraw assets, thus avoiding issues common to other crypto exchanges.

Reach out to Remitano via:

“Scaling the Bitcoin block size now is more important than ever before. It’s crucial to know that Bitcoin‘s 1MB limit can be stretched. If more people support Bitcoin 8M by Remitano, we can improve transaction information per block, thus driving down the average time it takes for a transaction to be published to the blockchain”. - As explained by Remitano

This initiative is part of Remitano’s broader effort to help support Blockchain in the face of a larger block movement, aiming to make Bitcoin more widely used and provide the ability to own Bitcoin for everyone; while also, benefiting investors and miners who have always supported Bitcoin.

Support the Bitcoin 8M campaign right away by downloading the signature provided by Remitano and signing the block you successfully mined with that signature.