What is Bitcoin Cash (BCH), and Why is it a Great Way to Scale Bitcoin?

In less than two years, Bitcoin Cash has survived hard forks, a crypto market crash, the introduction of second generation blockchains, and scandals involving members of its community.

Despite the turmoil, BCH has maintained its position as one of the top five cryptocurrencies in the world by market capitalization. To this day, it is the most successful hard fork of the Bitcoin network, with widespread acceptance in the largest cryptocurrency exchanges.

Do you know anything about the history of bitcoin forks? If you don’t, read this in-depth article on Bitcoin Forks.

A brief overview of Bitcoin Cash 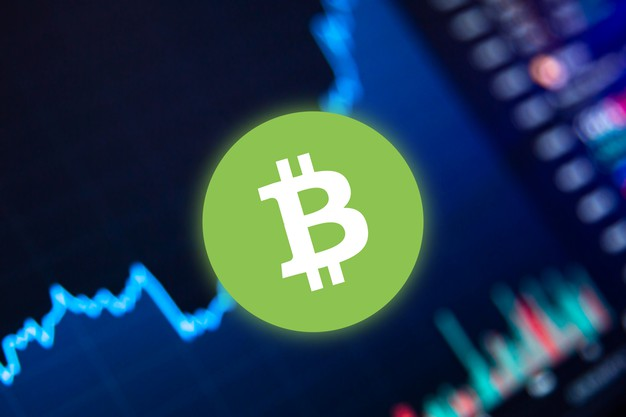 The origins of BCH can be traced back to debates over Bitcoin classic’s block capacity. Few early users anticipated that the limit of one megabyte would become a problem. However, as more people began to use Bitcoin, long delays in transaction times became common. A transaction was expected to take four full days to be confirmed in a dramatic episode during the height of BTC network congestion.

This resulted in a couple of updates to the main Bitcoin Network in 2017. The first was the implementation of SegWit2x, which stored a portion of the verification information outside the block. As a result, more space was made available for transactions within each block. Second, the BTC block size was increased to two megabytes, effectively doubling capacity. Because BTC is a decentralized network, all members had to agree to the changes in order for them to be implemented. A group of miners concluded that the changes would not solve the underlying scalability issue and decided to go their separate ways. Bitcoin forked towards Bitcoin Cash in August 2017 as a result of their decision, with a new block size of eight megabytes.

In 2018, the debate was brought back to the forefront. This time, one camp wanted to increase the block size to 32 megabytes, while the other advocated for a 128 megabyte increase. Finally, the talks came to a halt, and on November 15 of that year, the chain was split into BCHABC and Bitcoin Satoshi Vision. This has slowed Bitcoin Cash’s growth somewhat.

The characteristics of Bitcoin Cash

Bitcoin Cash, as a fork of Bitcoin, shares many of its ancestor’s characteristics. It will have a total supply of 21 million coins, will use Proof of Work for consensus, and will use SHA-256 as its hashing algorithm.

The significant differences are as follows. Initially, the block capacity was 8 megabytes, but it was later increased to 32 megabytes. To prevent information erasure, tampering, and spam messages, BCH has implemented concurrent chain work. Unlike Bitcoin, which adjusts the difficulty target every 2016 blocks, the difficulty target is adjusted at the sixth block. 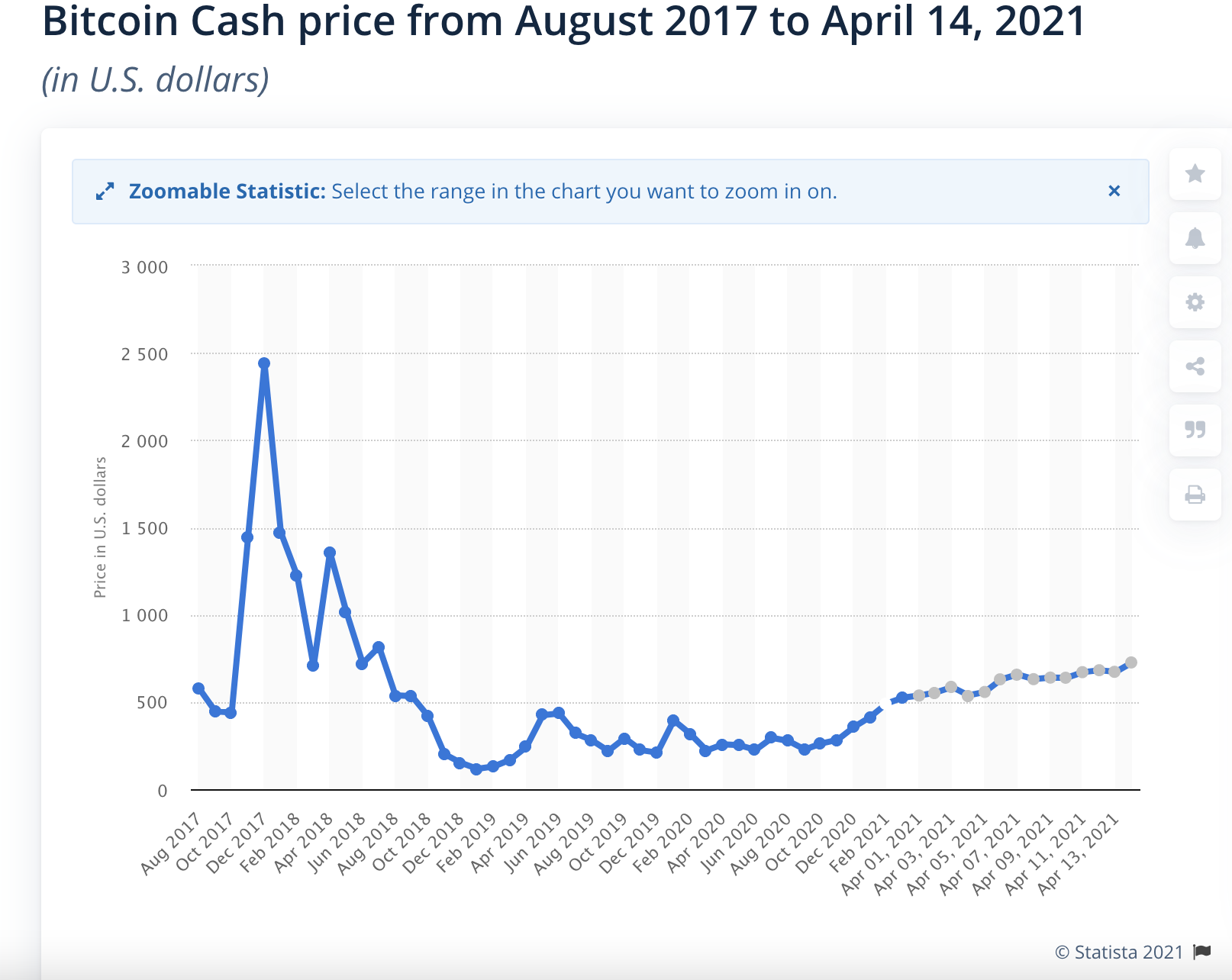 As we can see above, Bitcoin Cash has never been able to replicate the heights it achieved in 2018. Since then, the coin has been on a downward trend. This is not unique to BCH; all coins are struggling to reach the peak price valuations seen during the late 2017 and early 2018 boom.

We have the following on the horizon for the next six months:

This is in comparison to BCH’s initial price of 200 USD in 2017. BCH reached a price of $500 USD in September of the same year, attracting the attention of many investors and traders. Many mining pools and companies favored the coin’s simple mining process, and traders were eager for a new asset to use for hedging.

In a nutshell, there was a 30% drop in October of 2017. However, by November, the price had begun to rise again, owing in large part to the coin being listed on major exchanges and the official launch of the client. Then it reached 1000 USD, and soon after, BCH reached its highest value ever at $4,355.

The beginning of 2018 was not kind to Bitcoin Cash, as the price fell to 2600 USD and then to 700 USD, before recovering slightly to 1500 USD in May. As previously stated, the BSV hard fork in November 2018 sparked a hash-rate war between Bitcoin Satoshi Vision (BSV) and Bitcoin Cash (BCH) miners. This drove the price even lower, to its lowest point of 75 dollars. In mid-2019, the price of BCH fluctuated between 130 USD and 170 USD.

As developers began to implement the new block size, a hacker or group of hackers exploited the situation and launched a side chain. This allowed BCH to be spent twice as much, and many holders lost their assets, resulting in a total loss of 1.5 million dollars. Miners attempted to retaliate by adding empty blocks to the chain, resulting in a network crash.

To remedy the situation, two major BCH pools, BTC.com and BTC.top, pooled their processing power and launched a 51 percent attack. Because only two mining pools had enough power to control BCH, the price fell again amid concerns about security and centralization.

Despite reaching all-time highs of $840 and $715 in 2021, Bitcoin Cash fell to a new low and is currently on the mend. The price has risen above $480, and it remains one of the top five crypto coins by market capitalization.

What will the price of Bitcoin Cash be in the next five years? 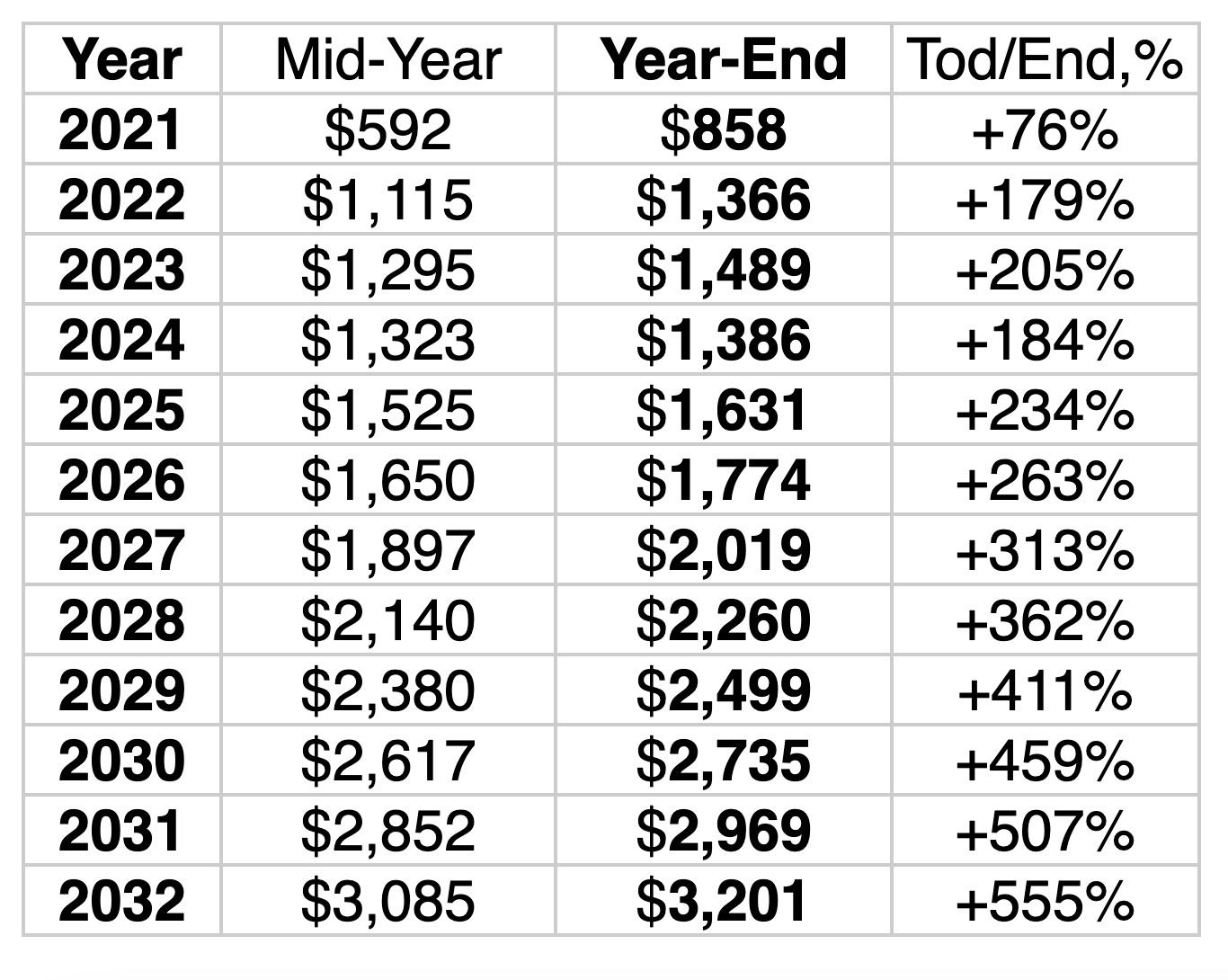 As we can see, BCH has been through a lot in its little more than three years of existence. During 2017 and 2018, the most successful fork of the Bitcoin main network experienced exponential growth, as did the entire crypto market. Then came the crypto winter, with prices plummeting across the board. On top of that, there was the BSV hard fork and the hack that caused a network crash.

BCH is currently losing a lot of its luster. The investor community is still concerned about the network’s lack of security. To address the issues, the Bitcoin Cash developer community is working on a series of updates dubbed Avalanche.

The update, which took place on May 15, 2020, aimed to address the following issues:

The following stage and most recent BCH changes occurred on November 15, 2020 and May 5, 2021, respectively. The ability to deploy smart contracts on the Bitcoin Cash network is one of the plans. With the security flaws fixed and future plans in place, BCH’s price could reach $500 to $600 by the end of the year. This is a conservative estimate based on how mature future updates will be and how well the community has reacted to recent changes.

Where can you purchase BCH?

The following are exchanges suitable for buying and selling Bitcoin Cash.

This platform is the most popular peer-to-peer (P2P) escrow service in the cryptocurrency market. It was an early supporter of BCH, dating back to 2018. The exchange was established in 2016 and now operates in over a dozen countries. It also allows users to purchase cryptocurrencies using fiat currency.

The trading fee is 1%, and the platform currently supports Bitcoin, Ethereum, Litecoin, Tether, and Ripple for swaps. It provides EOS, Binance Coin, ADA, Stella, Tron, Tezoz, Chainlink, Ethereum Classic, Neo, and Monero for Altcoin investment. The withdrawal fee for BCH is 0.0001, which is the industry’s lowest.

Cex is a centralized exchange that primarily operates in European countries. It allows you to purchase Bitcoin Cash in US dollars, Euros, or British Pounds. It charges a 3% deposit fee when using a credit card, as well as a 3% withdrawal fee plus a 1.20 dollar commission.

This platform is one of the largest on the market, and it accepts BCH purchases in USD, NGN, EUR, and a variety of other fiat currencies. Despite its flaws, BCH remains a powerful cryptocurrency. It is regularly traded on all of the major exchanges. It is backed by a strong developer community that rose to the occasion and learned from previous mistakes. Bitcoin Cash may come out on top in the coming years.

You should be aware that Bitcoin-8m does not cause a hard fork. Bitcoin8m core is simply a modified version of bitcoin core to start accepting blocks of weight up to 8 times the regular MAX_BLOCK_WEIGHT (which is defined at 4000000) if 1000 consecutive blocks in the past show acceptance of big blocks.. You can learn more by joining our Reddit discussions on these concerns.

Did you find this article interesting? Take a look at these related articles…

A History of Proposals to Increase the Block Size

How Successful Has BCH’s 8MB Been and Why should BTC Expand to 8MB?