Efficiently operating the blockchain requires both speed and security. But Bitcoin is hardly able to fulfill these attributes because of its limited 1MB block size.

Emerging within the community today are various arguments and opinions on how to scale Bitcoin.

Therefore, this post will discuss ongoing debates on the Bitcoin block size and how each proposed scalability solution could impact the network.

What is the Bitcoin Block Size Debate?

Taken together, there are 3 characteristics that hype the blockchain system — speed, decentralization, and security.

These features increase the trust level that makes blockchain important for the existing and next generation of cryptocurrencies.

Although we share the enthusiasm for blockchain’s potential, we worry about its future and ability to sustain these 3 main qualities. Why so?

First of all, blockchain technology lacks mass adoption among organizations. Complex security processes have become barriers to its adoption.

More importantly, there are technical challenges, such as immaturity (still slow and cumbersome) and the lack of scalability. 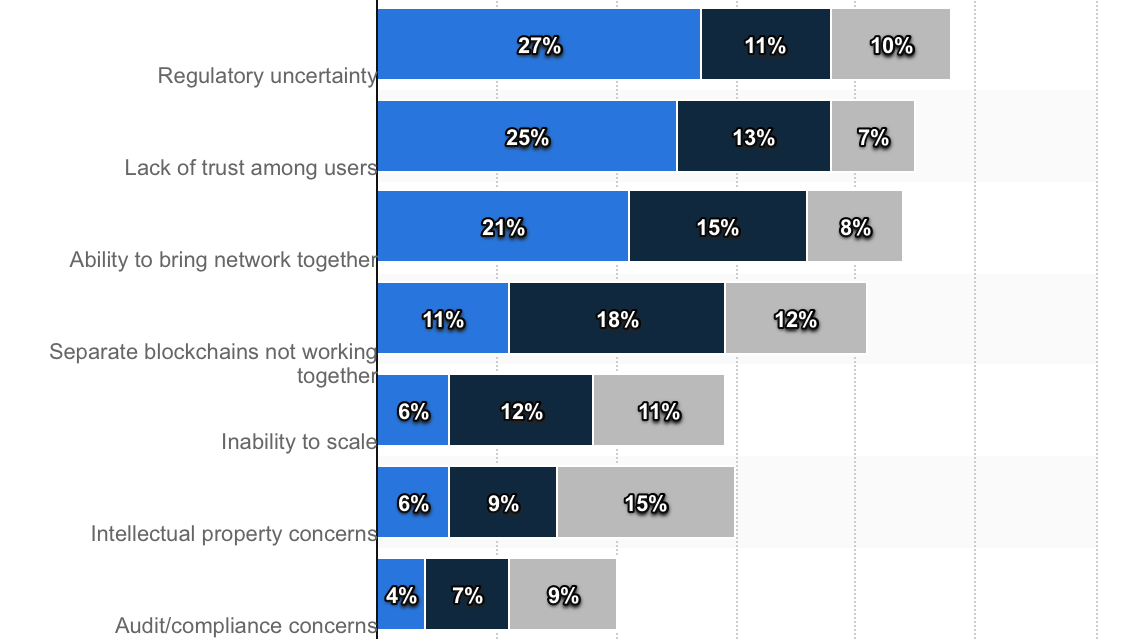 The image highlights the biggest barriers to global blockchain technology adoption. The colored blocks indicate the % of respondents according to 1st (blue), 2nd (dark blue), and 3rd (gray).

Scalability here means the blockchain system’s property to handle a growing amount of transactions by increasing in size. For example, the Bitcoin Block size is limited to 1MB and can only process to 3 - 7 transactions per second. Compared to PayPal and VISA, which can take Bitcoin still has a long way to go.

However, it’s absolutely possible to restore robustness, scalability, and speed to the network. But here’s the deal: the scalability solutions of Bitcoin are arguably controversial.

Several proposals have come forth on how to scale bitcoin, and a contentious debate has resulted. As such, Bitcoin’s block size debate centers around the need to improve the Bitcoin blockchain to manage more transactions at a given period.

In fact, if you’re considering investing in Bitcoin, there at least 2 crucial questions to ask:

Why Should You Care about the Bitcoin Block Size?

The average cost of a Bitcoin transaction at any given time depends on supply and demand.

And this correlation leads many people to doubt the use of cryptocurrency as an ideal financial tool for the masses. As a result, the community remains divided.

Now, theoretically, you can submit a transaction free of charge. But if other pools of users pay higher fees to miners (who can choose which transaction to process), why would anyone ever want to pick yours?

Moreover, the blockchain works in such a way that when the user base of Bitcoin increases, the average transaction fee also increases. If only a maximum of 7 transactions can be processed in a second, everyone would like to check theirs first. 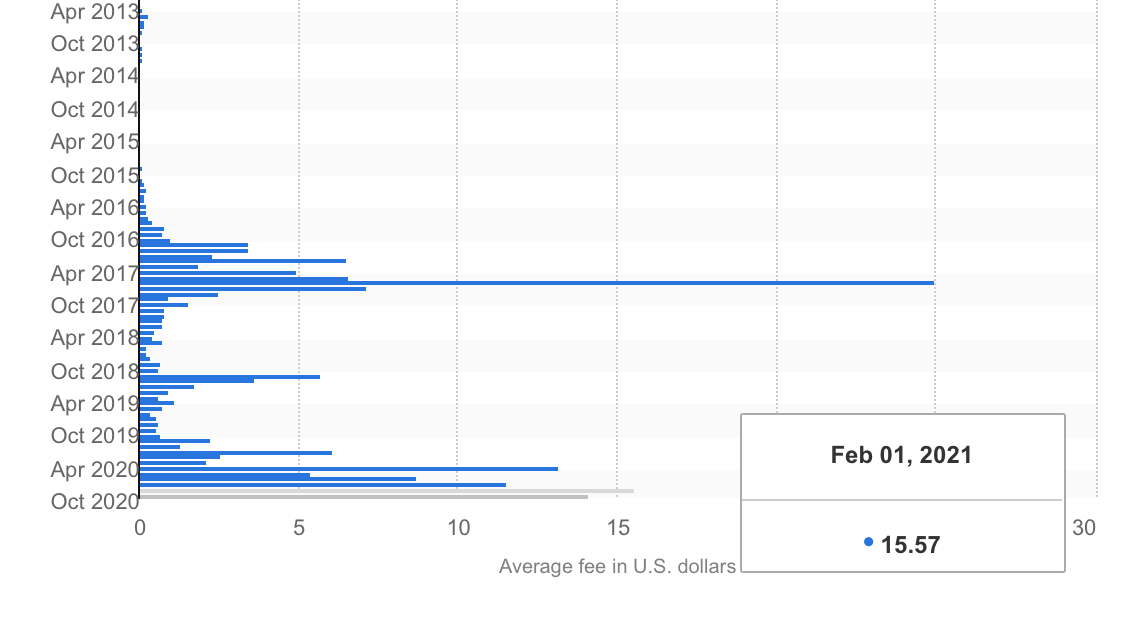 The image highlights the present average cost of Bitcoin transactions.

This fee is definitely not ideal if you want to give your friend a few dollars worth of bitcoin. It implies you will spend more on transaction fees than on transaction value alone! That’s the issue and why you ought to care. If nothing changes, you should expect the transaction fees to rise even more due to the ever-increasing amount of unconfirmed transactions. The Bitcoin Civil War: Proposals and Arguments

Because of the difficulties laced with Bitcoin as a blockchain, 2 main ideas on increasing the limit have appeared, including

As you’d expect, these concepts have their advantages and disadvantages, with different users approving and disapproving them. The series of disagreements lead to the so-called Bitcoin Civil war.

The Bitcoin civil war refers to a state of a divide between the Bitcoin Core Development Team (decentralists) vs. the Major Miners & Startup Companies (big blockers). This fight has been since 2015 when the proposal to scale the block size was initiated.

The clash would later culminate in July 2017, when some community members split between having a larger block size, no more than 4MB or 8MB.

So, what is the bone of contention between the sides, you may ask?

Debates against a Bigger Block Limit

Core developers are the guys responsible for maintaining the blockchain’s code and implementing updates to it when necessary.

Their view is that increasing the block size above 1MB would contradict the initial reasons why Satoshi Nakomoto created Bitcoin.

They argue that larger blocks, however, come at a cost externalized to the peer-to-peer network. These include

In August 2017, plans to increase it to 2MB were canceled due to lack of a common agreement.

Instead of increasing the size limit, in November 2017, decentralists devised a different approach, known as the Segregated Witness. SegWit handles signatures more efficiently and frees up block space but does not increase block size limits.

Rather than depend on size, transactions will be measured based on their weight. SegWit was assumed to give Bitcoin a “block weight” of 4 MB.

Debates for a Bigger Block Size

Opponents of the SegWit (big blockers) solution argue that it removes power from the miners who secure Bitcoin transactions. In other words, a real block size increase is inevitable if we must sustain the blockchain. Let’s say we increase the block size from 1MB to 8MB; how will it affect the blockchain?

Supporters of a bigger block size believe that a larger block indicates the following:

After the community aborted plans to increase the limit to 2MB, the debates heated up. This forced a few prominent miners to hard fork the Bitcoin Blockchain and create Bitcoin Cash (BCH).

Bitcoin Cash has the same block generation time as Bitcoin but varies in size, with the initial BCH block size set to 8MB compared to the Bitcoin block size of 1MB. 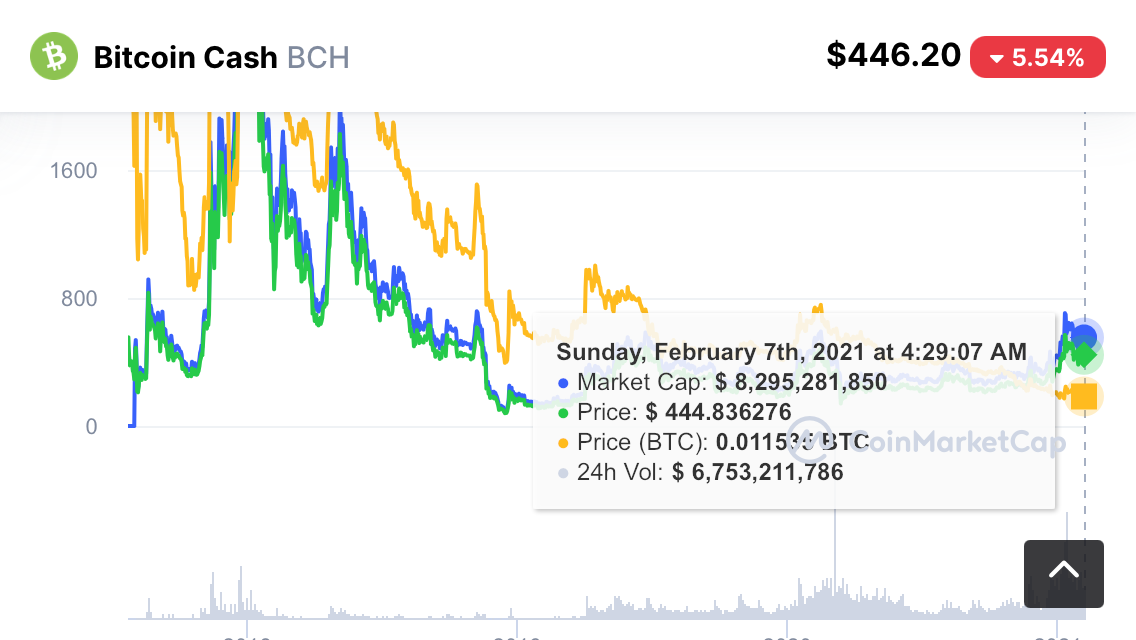 The image shows the current market capitalization of Bitcoin Cash.

Currently, Bitcoin Cash block size is at 32MB due to multiple software updates. In November 2018, Bitcoin SV split away from Bitcoin Cash in order to introduce a 128 MB limit—and that limit was raised to 2 GB in July 2019.

Bitcoin is imperfect and faces issues that need to be tackled by the whole community. The longer the bitcoin block size debate lingers, the less acceptable and valuable Bitcoin becomes.

Undoubtedly, growing the bitcoin block size is crucial at a time when millions of users are looking to enter the network, and bitcoin requires mass acceptance to compete effectively with conventional financial institutions.

Thankfully, a couple of developers remain committed and resilient everyday to realizing this solution. The newest initiative focused on promoting the need to support a block increase is called Bitcoin8M.

Remitano is also one of the notable supporters of this cause. At core, the Bitcoin8M project is really about raising community awareness of a bigger block’s significance to miners and stakeholders; hence it’s dubbed the hashtag #BitcoinSizeMatters.

If you could carve out a sustainable future for Bitcoin, wouldn’t you? Don’t focus on the future. Focus on what you can do right now that is promising no matter what the future brings.

There are mainly 4 stakeholders in the Bitcoin Community: The core developers, miners, the Venture-backed startups, and the users. 3 out of 4, including miners, startups, and users have their unique roles in scaling the blockchain to world-class standards. This is already achievable through supporting the Bitcoin8M campaign.

So, how can you support it?

Miners can show solidarity to Bitcoin8M by downloading the signature provided by Remitano and signing on the block they have mined successfully with that signature. For users, you can participate in the Reddit discussion group and share your opinions on #BitcoinBlocksizeMatters.