A History of Proposals to Increase the Block Size

Since its inception, the Blockchain network has seen a steady increase in public attention and interest. However, two years after its creation (in 2010), Satoshi Nakamoto introduced a new code to the original Bitcoin code that limits the block size of the Bitcoin Blockchain network to one megabyte (1MB).

Because of this limitation, large transaction amounts cannot be processed within a single block. This has also raised concerns about scalability. 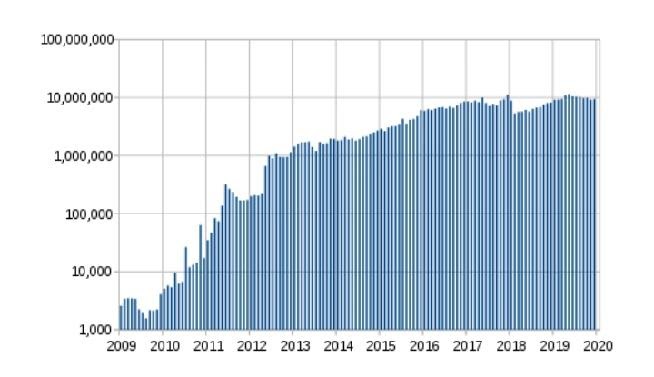 The image above indicates a steady climb in the Bitcoin transactions rate for twelve years. Over time, several proposals have been put forward, stating the need to scale Bitcoin by increasing its block size.

The challenges caused by the Bitcoin block size limit pose the question: how can Satoshi Nakamoto’s plan to make Bitcoin a widely used payment method be realized?

Satoshi Nakamoto’s ingenious invention cannot continue to meet the standards he established and achieve his dream of global adoption. As a result, the block size must be increased to balance the equally increasing number of transactions.

The challenge of scalability has been a long-standing dialog as the number of users continues to grow. So, there have been a series of proposals advocating the increase of Block Size over the years. We’ll go over the most notable proposals so far.

This approach advocates for a gradual increase in block capacity or speed limit (1,000,000 bytes) that solves scalability and ensures that the size restriction is not overly raised as stakeholders are still unsure how much increase could cause harm or unexpected outcomes.

Garzik’s proposal aims to isolate all limit increase endeavors from the dangers associated with Jeff Garzik and slowly remove the centralized management imposed on Bitcoin by the 1MB block size (and the seven transactions/second) limit (effectively decentralizing Bitcoin economic policy).

BIP 100 involves a hard fork at the initial stage, with all subsequent limit increases administered through a soft fork (which has considerably fewer dangers). It is an adjustable approach that allows Bitcoin miners to decide (by polling) what the next block size should be in relation to the rate of transactions carried out, keeping stakeholders and the overall efficiency of the Bitcoin software in mind.

This doubling will go on for 20 years, reaching a maximum size by 2036. This proposal further divided the Bitcoin community, creating three groups; trading platforms that support BIP 101 as a futuristic plan, the group who vote for no increase at all, the group that simply wants Bitcoin to be scalable and are indifferent about what methods are employed and the miners who prefer Jeff Garzik’s proposal.

Gavin’s proposal necessitated a hard fork and got executed in August 2015 on a forked version of Bitcoin; Bitcoin XT . Discontinuing the application of the one million bytes limit on Bitcoin XT was based on the condition that %75 of the last 1000 blocks available displayed a specific version bit set. As this margin was never actualized, miners stopped mining new Bitcoin XT, and eventually, BIP 101 was revoked from Bitcoin XT.

Jeff Garzik brought yet another proposal forward (again in 2015) to raise the size limit of Bitcoin blocks. This second proposal by Garzik suggested a block size limit increase from the original one million bytes to two million bytes without having any more increases in the future.

BIP 102 aimed to create a solution to scalability through a hard fork that will allow transactions that exceed one million bytes per block to be put on a new network. Once again, Garzik proposes an approach that avoids multiple hard forks.

In 2017, Pieter Wuille proposed a progressive approach to solve scalability; one that matches technological advancements as well as transaction rates. In this proposal, Wuille argues that as Bitcoin transactions increase, so do its hardware and technological requirements (bandwidth and storage), and since no block size increase brought about by a hard fork assures an indefinite satisfaction of these ever-growing demands (without risking a firm consolidation of the entire mining sphere), it is important to consider constructing a free market and an ecosystem that evolves and is capable of meeting technological requirements.

According to Wuille, the one-year interval between each hard fork is enough time to prepare and better manage the consequences of hard forking. Additionally, he stated that if at any time the increase achieved is higher than what is offered by the predominant technology, a soft fork can be executed to provide a more realistic limit.

Wuille’s BIP 103 recommended a yearly raise of the block size limit by %17.7 for 46 years (2017-2063). Nevertheless, as other BIPs brought forward before BIP 103, Pieter Wuille’s proposal is yet to reach a consensus. BIP 109 In 2016, Gavin Andresen returned with BIP 109. Like Jeff Garzik’s BIP 102, Gavin’s second proposal suggested a one-time two million bytes block size increase. However, Gavin’s new BIP proposed to put “limits on signature operations and hashing,” offering a 28-day grace period for blocks that exceed the block size limit.

This proposal was widely rejected and slowly died down until its author finally withdrew it in 2018. Elastic Block Cap In June 2015, Meni Rosenfeld proposed substituting the current Bitcoin hard cap (one million bytes limit) with the more flexible Elastic Block Cap. He Proposed that rather than putting a limit on block size, stakeholders should introduce a penalty for large block mining based on the size of the block. This proposal means that when miners mine sizable blocks, a fee will be deducted from the overall revenue generated from that block, keeping excessively big block sizes to a minimum and simultaneously reducing the possibility of overly large transactions.

Meni Rosenfeld’s proposal is a flexible approach that will minimize spam transactions but will not completely cut them out, as it means that large blocks can be mined without restrictions for the right amount.

Meni agrees with the argument that the Bitcoin software will crash if the block size limit is too little in comparison to transaction demands.

Moreover, he argues that since small block sizes inevitably result in extremely high fees, reducing the overall adoption rate of Bitcoin, and large blocks result in low or moderate transaction fees, it is better to have a block cap that provides miners with the possibility of mining the block size they prefer as long as they pay the mining fee attached to large block mining. Bitcoin Cash Bitcoin Cash is a cryptocurrency (altcoin) introduced in 2017 due to the Bitcoin hard fork that occurred in August 2017. Bitcoin Cash came about as a solution to the scalability concerns surrounding Bitcoin. In a little over a year, Bitcoin Cash itself experienced a hard fork that split it into two currencies; Bitcoin Cash and Bitcoin SV (Satoshi Version).

Bitcoin Cash was invented by concerned miners and developers and has effectively solved the scalability crisis by providing quicker transactions and lower fees. With this cryptocurrency, steady growth, transaction increase, and worldwide adoption do not pose any immediate threats.

Recommended: How Popular is Bitcoin Today?

Why Bitcoin 8M is Different 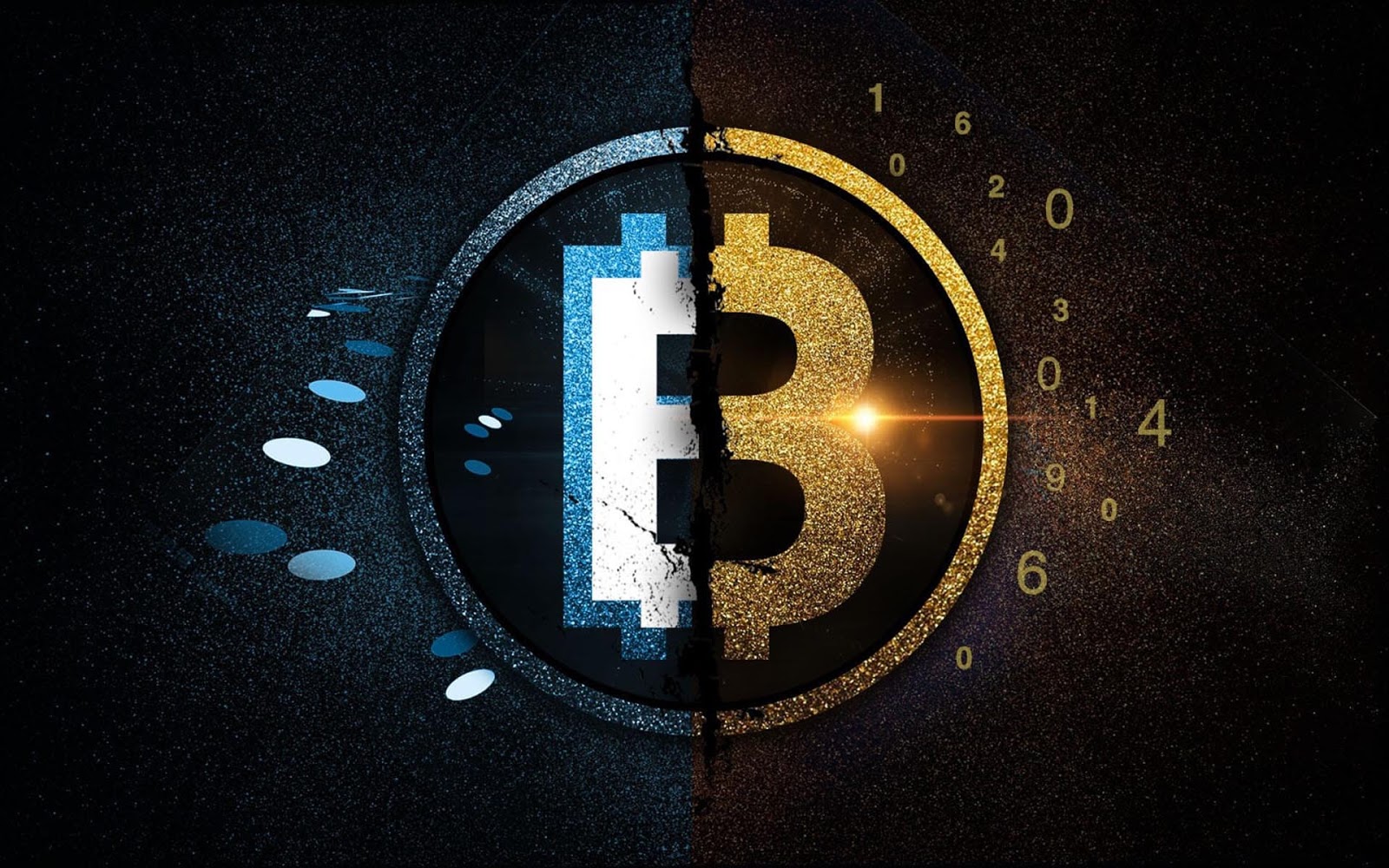 With Bitcoin Core 8MB being a direct descendant of the first Bitcoin software developed by Satoshi, we believe it retains more of the qualities that make Bitcoin so great. Because Bitcoin 8MB is not restricted to one million bytes per block size, it can process larger transactions within shorter periods, a feat that proved impossible with Bitcoin. Bitcoin 8Mb is decentralized and proves to be quite scalable.

If Meni Rosenfeld’s fear that excessively large block sizes that do not match transaction demand could crash the Bitcoin network proves true, Bitcoin 8MB would seem safer than even Bitcoin Cash as it seems quite unlikely that the current demand or transaction rate is anywhere near proportional to thirty-two million bytes per block size.

Additionally, since Bitcoin 8MB maintains the original Bitcoin blueprint, we can be sure that it follows the initial guidelines laid out by Satoshi.

Recommended: How is Bitcoin8m created and why it won’t cause a hard fork.

As Bitcoin adoption grows around the world, we believe a size increase is in order. A block size increase, if done correctly, could be beneficial in the long run.

However, because there are always two sides to every coin, we understand that implementing any size adjustment will not be completely painless. Every block size, large or small, will have advantages and disadvantages.

What is clear to everyone (miners and stakeholders alike) is that unless the block size limitation issue is resolved, Bitcoin will soon reach maximum scalability, and how long will the coin survive?

The Bitcoin scalability problems have created a bottleneck situation for the network, as well as a paradox around Bitcoin being the most sought-after cryptocurrency while being so transactionally restricted. A block size increase appears to be unavoidable if the Bitcoin network is to achieve scalability. The success of Bitcoin Cash has demonstrated that larger block sizes are preferable.

Read about the most compelling arguments so far in support of larger block sizes and ways to make them a reality.